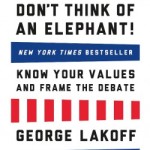 The ALL NEW Don’t Think of an Elephant! Know Your Values and Frame the Debate picks up where the original book left off, but delving deeper into:

How framing works;
How to frame an integrated progressive worldview covering all issues;
How framing your values makes facts, policies, and deep truths come alive;
How framing on key political issues—from taxes and spending to healthcare and gay marriage—has evolved over the past decade;
How to counter propaganda and slogans using positive frames;
How to speak to “biconceptuals”—people with elements of both progressive and conservative worldviews; and,
How to think about complex issues like climate and the increasing wealth gap.

This book is the essential progressive guide for the issues that define our future: climate, inequality, immigration, health care, and more. (preorder your copy today, books ship in early-mid September)

What is framing and reframing? “It is not easy or simple. It is not a matter of finding some magic words. Frames are ideas, not slogans,” writes Lakoff. Framing is about what is right, why it is right, and how to communicate what needs to be said out loud every day in public. Framing is about ideas — ideas that come before policy, ideas that make sense of facts, ideas that are proactive not reactive, positive not negative.

The Impact of the First Edition on American Political Debate
Since his publication of the original version ten years ago, Lakoff, called “the father of framing” by The New York Times, has been the go-to expert on how progressives can better engage supporters, and opponents, on important issues. He has worked with numerous progressive groups to help them articulate their goals and values to citizens, frame the political debate, understand how conservatives think, and learn how to think and talk about shared values. The original edition, for instance, turned the tides for same-sex marriage by helping progressives frame the debate in terms of love—and the freedom to marry who you love—and subsequently realign policies that have benefitted millions of people.

“Ten years ago, when we published the first edition of Don’t Think of an Elephant!, the country was living through the Bush years, progressive messaging was in tatters, and the book—written and published in a whirlwind before the 2004 elections—became an instant best seller,” recalls Margo Baldwin, president and publisher of Chelsea Green Publishing. With more than a half million copies sold in it’s lifetime, the book has remained a top-selling political classic. “Times have changed dramatically,” notes Baldwin, “and it’s time for a fresh look at framing and the issues we are facing today, and in the future.”

In this all-new book, Lakoff reveals why, after a brief stint of winning the framing wars in the 2008 elections, Democrats and progressives have returned to losing them and how they can start winning again. Lakoff urges progressives to go beyond the typical laundry list of facts, policies, and programs and present a clear moral vision to the country—one that is traditionally American and can become a guidepost for developing compassionate, effective policy that upholds citizens’ well-being and freedom.

What’s New in The ALL NEW Don’t Think of an Elephant!
In addition to the new topics listed above, Lakoff has written several new sections in this updated and expanded edition, including:

Framing 102 explains how readers can begin to provide the frames that will allow the public to automatically and effortlessly grasp complex, systemic issues like climate change, the wealth gap, and other issues that much of the public currently misunderstands. This new section delves into:

How journalists and other communicators can do a better job explaining systemic causation.
How to emphasize that private gain depends on public support.
How constant public discourse leads to brain change, with emphasis on how conservatives have used this to their advantage and where progressives have fallen short.

As well, several popular sections of the original book have been updated. Such as:

Framing 101, the classic explanation of the mindsets through which progressives and conservatives view the world, and political issues.
How to Respond to Conservatives, including new information on how to speak to conservatives about unions, pensions, student debt, and other issues that have risen to the surface since the first edition.
What the Right Wants, Frequently Asked Questions, and What Unites Progressives have been updated as well, including discussion on how progressives have splintered during the Obama years and where to find values-based common ground.

Stay After Class & Receive Extra Credit!
For readers who’ve stayed with us this far in the blog post, we thought we’d offer you some interesting tidbits about the original Don’t Think of an Elephant!

Don’t Think of an Elephant! was Chelsea Green Publishing’s first New York Times bestseller. There have been three others since: The End of America by Naomi Wolf, Obama’s Challenge by Robert Kuttner, and The Art of Fermentation by Sandor Ellix Katz. The book, however, was listed in the “self-help” category rather than the political nonfiction list, which stirred up its own little controversy.

Did you know? The book takes its name from a favorite assignment that Lakoff gives his students to explain how politicians frame public debate.

The original book went from manuscript to printed book in just five weeks to capture the attention of the mid-term elections in 2004—a relatively unheard of turnaround time in the publishing world at the time (and still).

George Lakoff is Richard and Rhoda Goldman Distinguished Professor of Cognitive Science and Linguistics at the University of California at Berkeley, where he has taught since 1972.